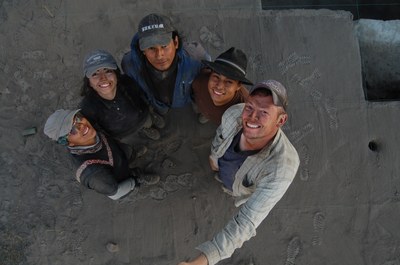 Eric Dyrdahl is a Junior Fellow at Dumbarton Oaks, Profesor Auxiliar at Pontificia Universidad Católica del Ecuador (PUCE), and a doctoral candidate in Anthropology at the Pennsylvania State University (PSU). Eric received his M.A. with distinction in Anthropology from PSU in 2010 and his B.A. in Anthropology and Political Science from Northwestern University in 2007. He has been conducting archaeological research in highland Ecuador for over a decade, investigating topics such as local resistance to Inka conquest, variation in obsidian procurement in prehispanic Ecuador, and craft production in the Late Ecuadorian Formative (800-400 cal BC). Alongside his advisor Ken Hirth and fellow PSU graduate students, Eric also conducts chemical characterization research on obsidian in central Mexico. While in Ecuador on a Fulbright grant, Eric began excavations with co-director Carlos Montalvo at a Late Formative site (Las Orquídeas) near the modern city of Ibarra in the province of Imbabura. The rich artifact assemblage from Las Orquídeas has become the focus of both of their doctoral dissertations. Eric’s research is dedicated to the reconstruction of the production sequence for various adornments and tools produced with non-local raw materials and their anthropological implications. Investigations at Las Orquideas have been supported by the American Philosophical Society, the Ecuadorian Ministry of Higher Education, Science, Technology, and Innovation (SENESYCT), National Geographic, Fulbright, PUCE, the municipality of Ibarra, PSU, and La Sapienza, University of Rome.